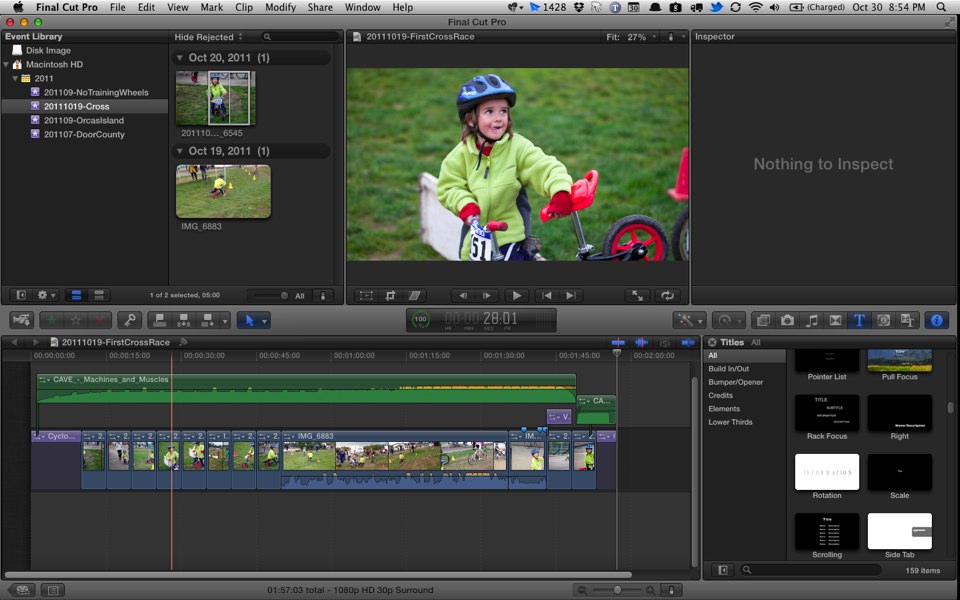 My post, Final Cut Pro X on a MacBook Air, has received a surprising amount of traffic. So I thought I would provide a brief follow-up that covers why I purchased FCP X and how it has been performing on my MacBook Air.

Like I mentioned before, I am no videographer and I probably have no real reason to spend $300 on video editing software. iMovie is incredibly simple to use and can make great videos fast, but it seemed hard to do simple tasks I wanted to do and lacked features I was after. Some of those features:

OK, so not an overly impressive list, but considering how much I have invested in camera and computer gear a few hundred dollars seemed a small price to pay to ENJOY creating videos HOW I wanted with little effort. Kudos to Apple for taking the controversial move to make Final Cut Pro more like iMove and dropping the price by almost a grand. Otherwise, I would not even be writing this post. But what about performance?

FCP Performance on a MacBook Air

Even though I have a 2010 MacBook Pro and a 2009 iMac I still do all my video editing on my MacBook Air. I guess I do this mainly out of convenience. Something is so appealing about working on a MacBook Air instead of a MacBook Pro (what now seems like a big, heavy brick) or trapped at a desk working on an iMac. Surprisingly, I have not had any issues or experienced poor performance (no spinning beach balls) when using FCP X on my MacBook Air. As an example, my latest video below I was able to put together in about 15 minutes. More surprising was the encoding speed:

At the end of the day you will have to justify the $300 for Final Cut Pro X, but I can say with confidence that the MacBook Air can handle the software just fine…at least for the casual user like myself.